"By separating the dresses into nine different categories, the curators sort the works underneath umbrella concepts–memory, voyeurism, marriage, the female nude, girlhood, strength, embroidery, social status, and gender fluidity". Jenna H. Romano on "Her Dress, Her Symbol" at Agripas 12 and Marie Gallery 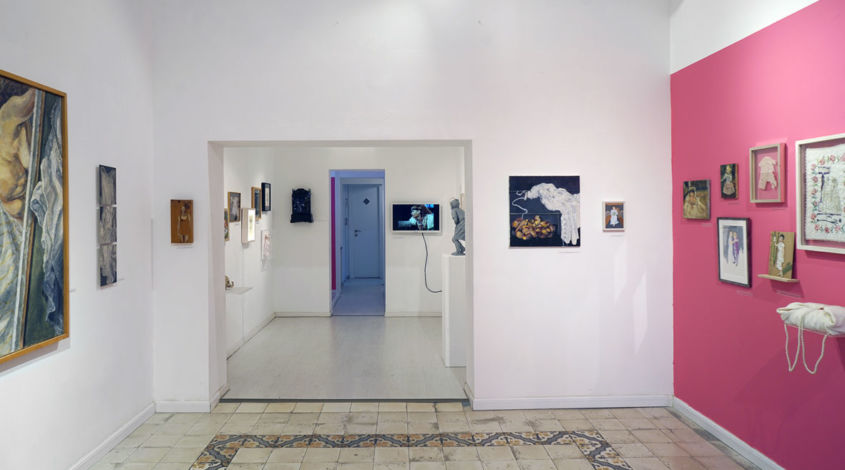 Exhibition View 'Her Dress Her Symbol', photo by Shlomo Serry

The exhibition Her Dress Her Symbol has feminist roots — it is curated by Nomi Tannhauser and Rita Mendes-Flohr, two veteran forerunners in the local art scene whose influence inspired paramount feminist dialogue in the 1990s and 2000s in Jerusalem. However, the power of Her Dress Her Symbol,  which features the art works of 100 Israeli, Palestinian and international individual artists, is that it possesses a multi-faceted aesthetic dialogue that goes beyond the feminist doctrine.

An accompanying catalogue elucidates the historical backdrop of the show – Tannhauser and Mendes-Flohr tribute the driving creative force behind Her Dress Her Symbol to their work at Antea Gallery, a gallery for feminist art in Jerusalem that was active from 1994-2009. The visionary space allowed feminist discourse to exist at a time when it was being silenced in Jerusalem. Over 50 solo and group exhibitions which the duo curated in Antea explored topics like racism, body image, beauty, female identity, and religious hegemony.

The catalogue sheds light on the admirable work of Antea, forgotten to newer generations of artists in Jerusalem, but it is a topic is not central to the show itself. To the unread, unprepared viewer of this exhibition, this element is not essential, though it is a significant piece of history. I am glad that this element is perhaps ‘extra reading’. It would have been too confusing to highlight this in the show using the art works, it would have been superfluous to do so, and it would have taken away from the harmonious artistic flow embodied in Her Dress, Her Symbol.

Rather than give visitors to the exhibition an amorphous interpretation on the history of dresses, or an overly didactic display that attempts to define feminist art in Jerusalem, what Her Dress Her Symbol manages to do so well is to highlight the individual aesthetic language of 100 different artists, who were each asked to submit work that interprets the meaning of a dress. The distinguished dresses displayed this exhibition stand on their own and speak for themselves — and also beg us as viewers to act as arbiters of meaning and taste. It is refreshing to visit an exhibition where we do not need to rely on text to define it, but by virtue of our own observation, are allowed to come to our own understanding. 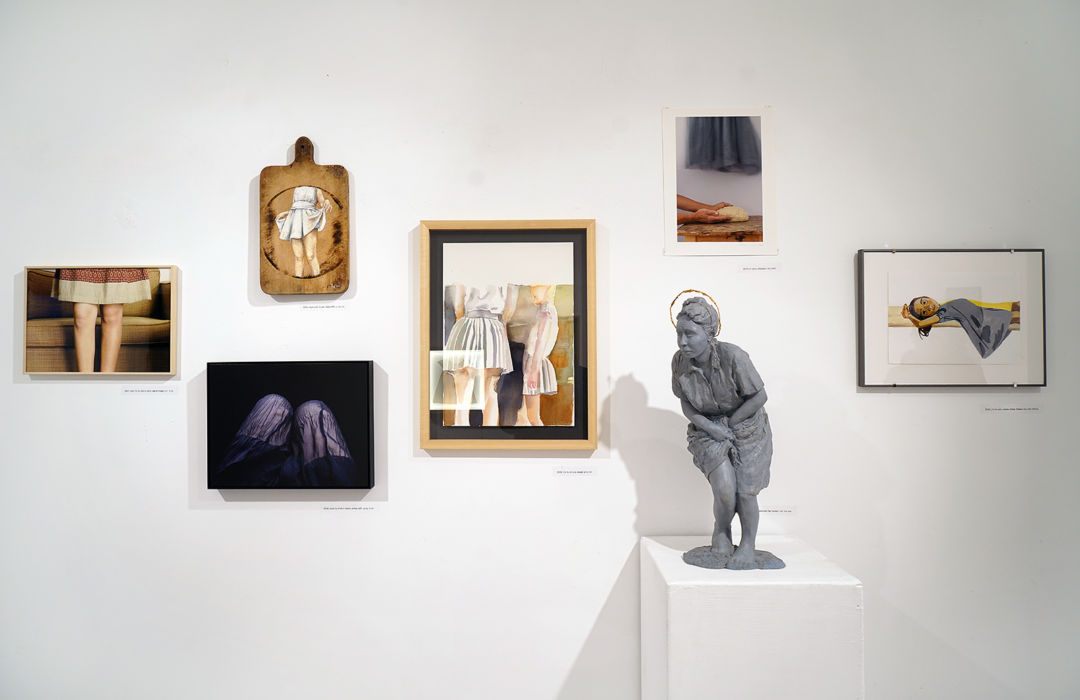 Exhibition View 'Her Dress Her Symbol',photo by Shlomo Serry

The works span painting, drawing, photography, video, and sculpture. Some of the dresses are more nuanced than others, and the diversity of ideas evoked by the artworks range from comical, critical, nostalgic, even celebratory.

One work encompasses an interesting critical voice in the exhibition–Merav Shin Ben-Alon’s marker drawing titled “Following Michal Ne’man” (2013). The small, colorful piece might go unnoticed. It depicts the bottom half of a women in the dress with her legs spread wide open. Paired with combat boots, there is a juxtaposition between the freedom of movement which the dress allows the figure to have, versus the insinuation of the enticing attraction for a passerby to look underneath. 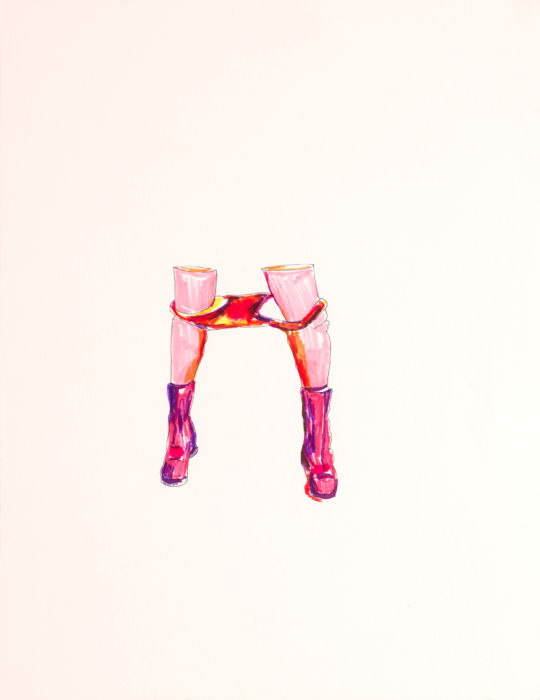 The title “Following Michal Ne’man” alludes to the artist’s desire to retrace the footsteps of Israeli artist Michal Ne’man, who was at the pinnacle of her career in the 1970’s. Ben-Alon questions Ne’man’s decision to separate her artwork from the feminist dialogue at the time, offering the viewer a critical look the complex relationship between art and feminism. The image itself is an interpretation of one of Ne’man’s works, which tells us that Ben-Alon’s opinion is that perhaps the artist she looks after was feminist after all.

Jennifer Bar-Lev’s digital print “Stage” (2018) presents us with a scene where three female figures—Bridezilla, Kim Kardashian, and a kinky masked nude playing a violin—are set on a stage. Joseph Buys looks on, and his proximity to the stage in the composition makes him a metaphor for the male gaze. The postmodern combination of pop culture clichés with references to art history are humorous. The image makes you wonder – who is responsible for the voyeuristic spirit of this scene – is it the dress (or lack thereof), the women, the man, or the stage? 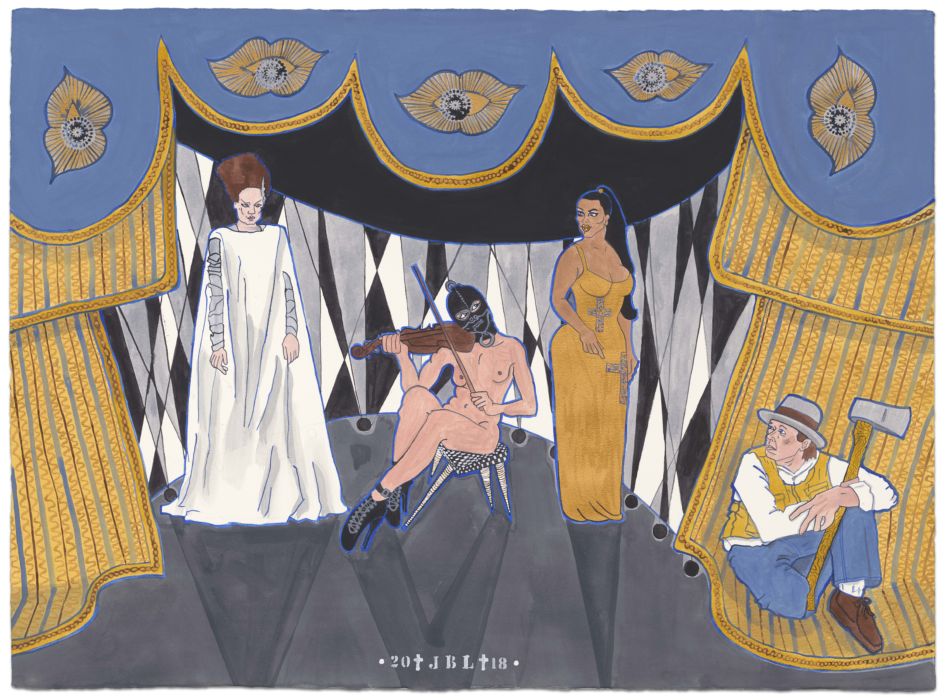 Like other works in the exhibition, Andi Arnovitz’s dress, “Crushed” (2016), connects to the disturbing reality of rape and the act of sexualizing little girls. Arnovitz, a Jerusalem based artist is often critical of her local community, touching on taboo subjects and bringing them to light. Here the artist literally brings the subject of sexualization to light, placing a toddler-size dress in a light box, and adding dehydrated flowers to the areas where the girl’s nipples and vagina would be placed. The delicacy of the display, versus the severity of its implications are characteristic of Arnovitz’s work, and it is likely that this comes from the artist’s criticism of certain aspects of Orthodox Jewish culture in Jerusalem, namely the exaggeration of female modesty which often forces little girls to become aware of the sexual allure of their body by requiring ‘modest dress’ at a very young age. 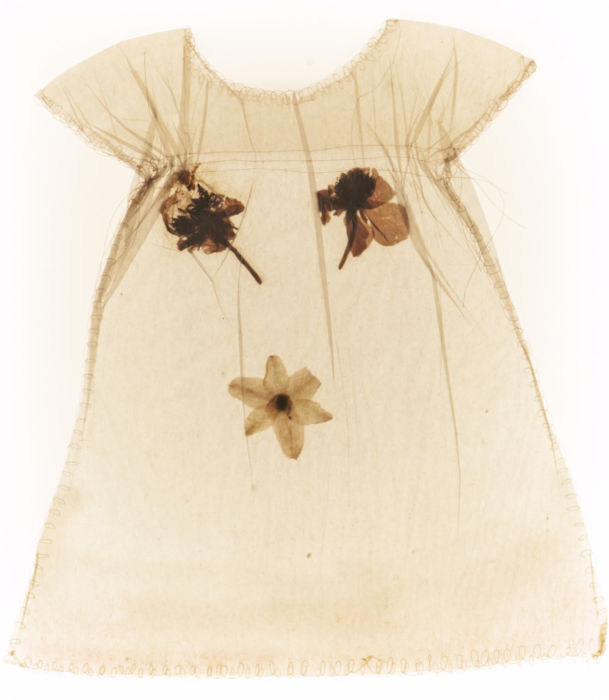 A video recording of the Tamar Raban’s performance piece “Dinner Dress – Tales About Dora”, which traveled from 1997-2003, is played in the exhibition and is a really brilliant addition, attaching a retrospective element to the show. The multi-sensory performance features Raban in the center of a table where 24 audience members dine on her facetiously feminine dress. As the guests eat a full-course meal cooked on the spot, Raban recites stories about her mother, who was a famous patient of Freud. Connecting food, memory, femininity, analysis, and trauma into one performance, Raban’s dress becomes an artistic stage for performance, and a hilarious, ironic symbol for her and her mother’s identity.

Hannan Abu Hussein, a Palestinian-Israeli artist whose works are always strong, presents a minimal sculpture of a dress from 2019. The strong, voluptuous dress devoid of a figure resembles something of a ritual piece, alluding to fertility and femininity. Covered in ashes, however, it has apparently risen from or faced destruction.

A subtle work presenting the dress as a gender fluid symbol is Meydad Eliyahu’s “Mondi” (2018). Eliyahu presents a painting of a smiling male figure wearing a Mondi skirt, common for men to wear in India, which inspires the viewer to think about an alternative to the harsh masculinity that has been reified in Israeli culture.

Etti Abergel’s dress “Immigrant Bag” (2017-2019) is a porous readymade sculpture of a dress assembled in what seems a sisyphean manner, whereas the artist labored to achieve unseen details so that the dress which is sewn delicately still resembles a shopping bag. The work hints at the role of clothing to secure social status, as well as the harsh reality that many expensive designer are a result of labor by underpaid workers. 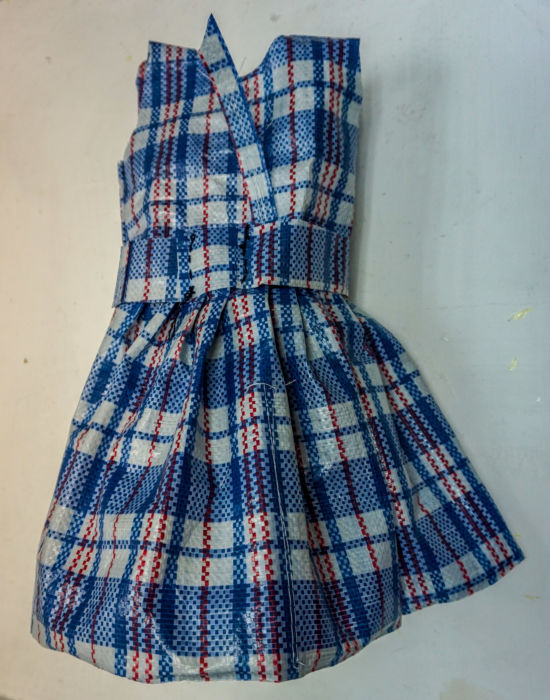 Other artists strictly use the dress to map out feminist points of view – whether they use the opportunity to present a critical examination of gender parity, to voice their political opinions, or as an to celebrate progression. In other works, the dress is linked to personal experience – family history, marriage, where the viewer gets the sense that the image of the dress is linked, like a Proustian madeleine, to a plethora of memories and emotions.

By separating the dresses into nine different categories, the curators sort the works underneath umbrella concepts–memory, voyeurism, marriage, the female nude, girlhood, strength, embroidery, social status, and gender fluidity. This is not a necessary detail, but I’m sure it helped the curators create a sense of order, especially considering the scale of the exhibition – which is large as far as local art shows go in Jerusalem. These categories might also help some viewers flesh out their own reactions to the collection.

A dress lost in its quotidian function is a feminine garment of clothing, but in Her Dress, Her Symbol the 100 distinct representations of dresses stand on their own, and viewing each of them becomes a pensive act. The dress is turned into a symbol for personal or universal ideas, and after individual contemplation, they give way to one another. 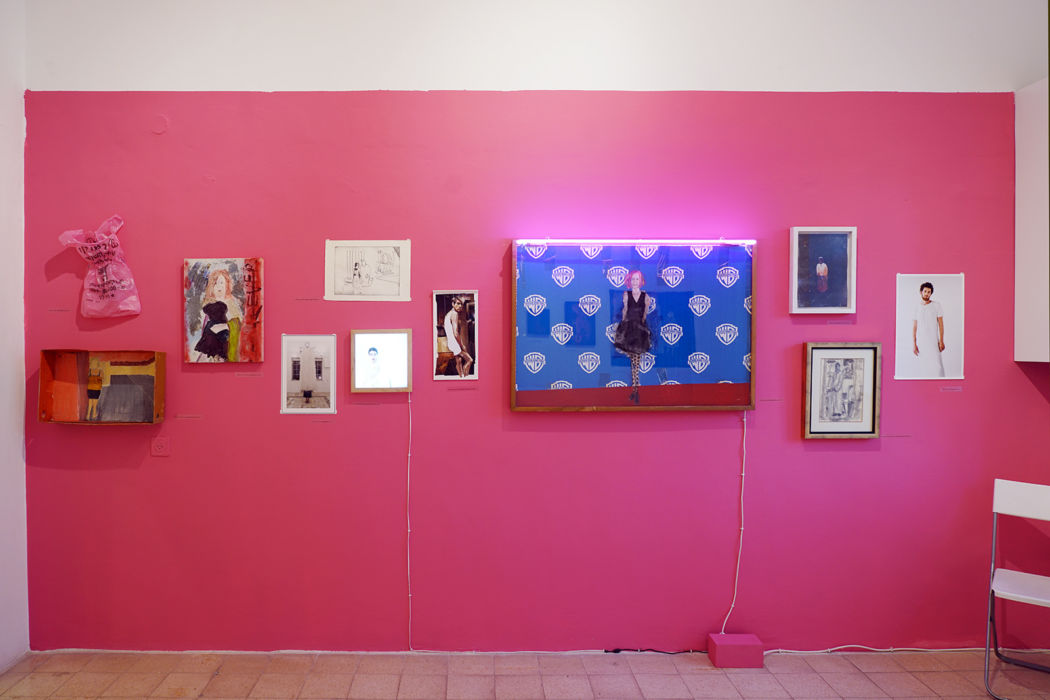 Exhibition View 'Her Dress Her Symbol', photo by Shlomo Serry

Because of the show’s size, taking up the space of two galleries adjacent to one another in the center of Jerusalem, it is impossible that a one-off view will give a visitor the opportunity to contemplate each of the works. The best strategy is to find a few pieces on each wall that catch your eye, and to let one poignant piece give way to another. If you go, please also think about this exhibition as a unique opportunity to encounter works by a stunning number of Jerusalem based artists, who are by default on the margins of the contemporary art world. These outsiders will give way to an alternative experience of art that is, if not anything else, engaging.

Her Dress, Her Symbol is on view at Agripas 12 and Marie Gallery in Jerusalem until May 26th. www.antea-dress.com.

1 תגובות על “Turning A Dress Into A Symbol”

I a German Artist, who will be in Novembre in Ness Ziona for an exhibition, which I curate and would like to combine it with a productive art work in Israel.
Would you have a studio or a project, I could join during the time of my stay?
Best Regards