David Grossman born in Jerusalem on January 25, 1954, is an Israeli author of fiction, nonfiction, and youth and children's literature. His books have been translated into numerous languages. The Yellow Wind, his nonfiction study of the Palestinians in the Israeli-occupied West Bank and Gaza Strip met with acclaim abroad but sparked controversy at home.
Grossman studied Philosophy and Theater at Hebrew University. He worked as a correspondent and radio actor for Kol Yisrael, Israel's national broadcasting service. He was one of the presenters of Cat in a Sack, a children's program broadcast from 1970 to 1984. His book Duel was first aired as a radio drama on Kol Yisrael. Together with Dani Eldar, he hosted the slapstick radio program, Stutz (Yiddish: "that can happen"). In 1984, Grossman won the Prime Minister's Prize for Creative Work.
Grossman, an outspoken peace activist, supported Israel during the 2006 Israel-Lebanon conflict. On August 10, 2006, however, he and fellow authors Amos Oz and A.B. Yehoshua held a press conference at which they urged the government to agree to a ceasefire that would create the basis for a negotiated solution.
Two days later, his 20-year-old son Uri, a staff sergeant in an armoured unit, was killed by an anti-tank missile during an IDF operation in southern Lebanon shortly before the ceasefire. [1]
On February 2, 2007, Grossman was awarded the degree of Doctor Honoris Causa by the Katholieke Universiteit Leuven, Belgium.
Grossman lives in Mevasseret Zion on the outskirts of Jerusalem. He is married and the father of three children, Yonatan, 24, Ruth, 14, and the late Uri. Lost his eldest son in the 2nd Lebanon War 07.2006
Taken by Kobi Kalmanovitz for: The EMET PRITZE Catalogue 2007 in Mikenot Shaananim / Jerusalem, on Wednesday 25.07.2007 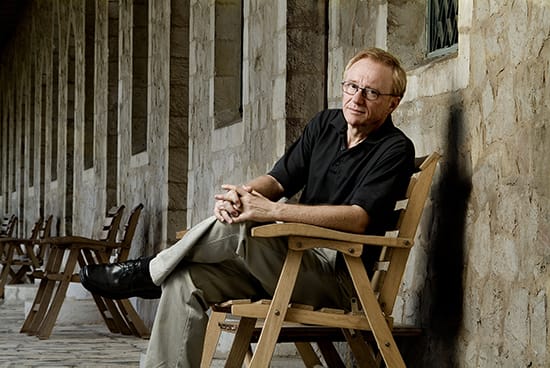