A lush field of barley, figs, grapes and tomatoes drying in the sun and great conversation. Amy Sapan visited "Black Couscous" by Rafram Chaddad Boaz, a site-specific work located on a rooftop in Jerusalem just a stone's throw away from the Old City. 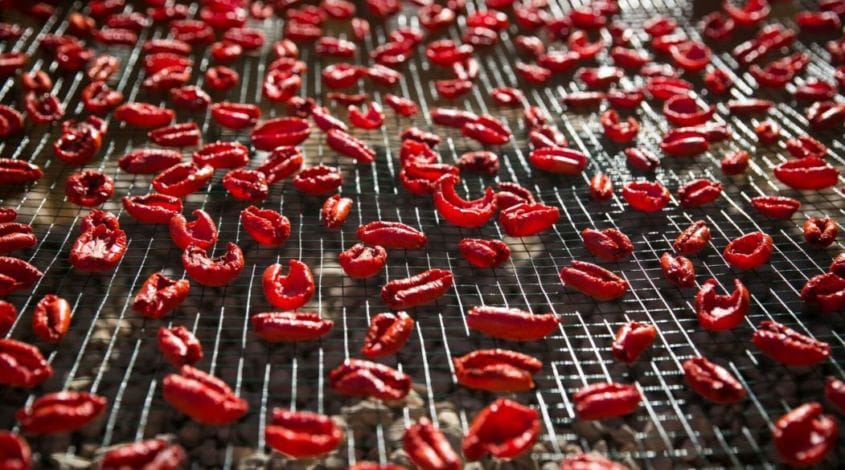 Tomorrow (Thursday) is the last day to catch "Black Couscous" by Rafram Chaddad Boaz, a site-specific work located on a rooftop in Jerusalem just a stone's throw away from the Old City. It’s one of seven that were created for “Above and Beyond” as part of this year’s Mekudeshet festival. On this rooftop above Safra Square, home to Jerusalem’s City Hall, you'll find figs, grapes and tomatoes drying in the sun in six large wooden "couscousieres" that have been flipped on their heads. When you arrive, you will be directed to a basin where someone will pour water from an antique pitcher over your hands and then invite you to dry them in one of the Turkish towels folded neatly in a pile. Rafram is seated in a lush field of barley that has been growing tall for two months, engaged in conversation with the group that arrived just before you – you are not permitted to enter the field, but are invited to stroll around the drying racks, to look but not to taste. A gong sounds and the field talk draws to a close. Rafram stands up and beckons you, inviting you to take a seat. 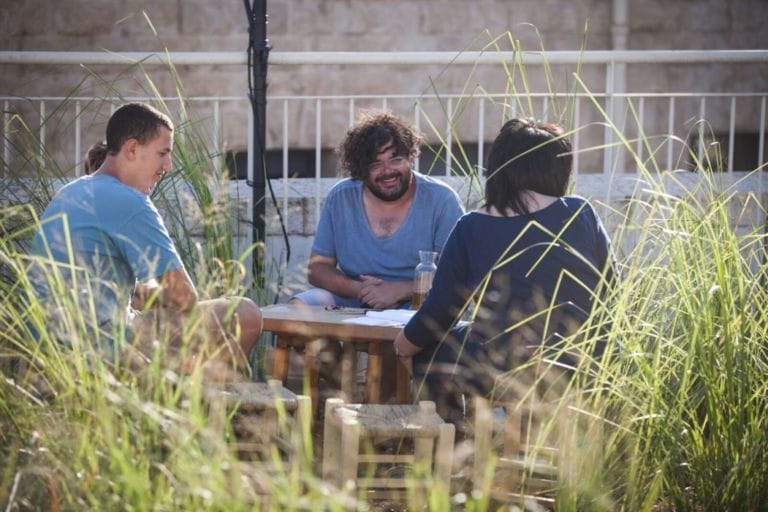 Over the course of the next fifteen minutes, together you will sit in a circle inside this circle of green, under the warm glow of a retro-future lamp. A conversation about the work will unfold and Rafram will prepare a dish of these now-dried gems and barley couscous on a cutting board so close to where you sit that you may wrestle with certain desires to extend your hand as though it were your beak and you were a crow, salivating, curious about the taste of these novelties.

Rafram introduces himself, and begins to speak about the driving forces behind the project – about hip cuisines and the unfortunate ironies of our food economies in which it costs substantially more to buy fewer, less processed calories and crisp linen restaurants serve rich people food once reserved only for the poor, all this, a phenomenon he refers to as black/white food, hence the name “Black Couscous”. As the conversation unfolds, Rafram grabs smaller couscousieres that lay to his left and right – one contains lettuce, another couscous, and another still the sun-dried tomatoes, grapes, and figs. Rafram points to a microphone near the cutting board points to a cadre of people wearing headphones on a roof behind us and tells us that they can hear everything we are saying in real-time. It is the birthday of a young woman in our circle and as Rafram cuts through the tomatoes, figs and grapes with a small paring knife, we sing happy birthday and demand that the onlookers participate – they don’t. We are silly with anticipation. The sun has set, the air is autumn crisp and the conversation breathes – Rafram is charming as ever, eschewing the pretense and weight ubiquitous in the art world in favor of a smiling fluidity. 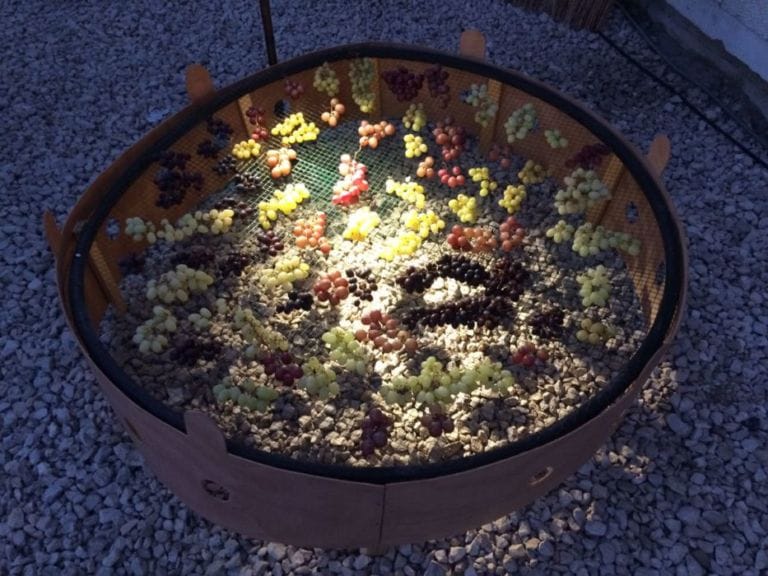 He grabs couscous with his fingers and places a mound of it on the board, and now seasons the pile of eats with a generous pour of olive oil from Nablus and sprinkles of a good flaky sea salt. He begins to speak about the barley, its transformation from animal fodder to lauded health food, and the ascension of barley couscous to menus of top restaurants in Tunis. I can't help but laugh at myself – just last week my acupuncturist suggested I buy some barley grass powder. I say this out loud. Now we all laugh. Rafram tosses the pile on the cutting board with his hands, pinches off a part of it, cradles it in a leaf of lettuce and then rolls it up, handing it to you. The conversation continues, you unfurl the lettuce and try each ingredient separately before rolling it back up and eating it as its maker intended. Bites become parts of you, and so too the memory of a half dried Jerusalem tomato, sour, sweet and earthy.

Suddenly someone in the distance strikes a gong, the fifteen minutes are up, and so are you. Maybe you'll stop by the couscousiere's again, take a few more pictures of the instagram-ready produce, maybe you won't, but either way, it won’t be long before you'll descend the stairs and find yourself in the thick of Jerusalem stone again. This story, like so many meals before it, will be behind you, unless you somehow find yourself sitting on your couch at home, ironically processing food, days after you’ve consumed it. 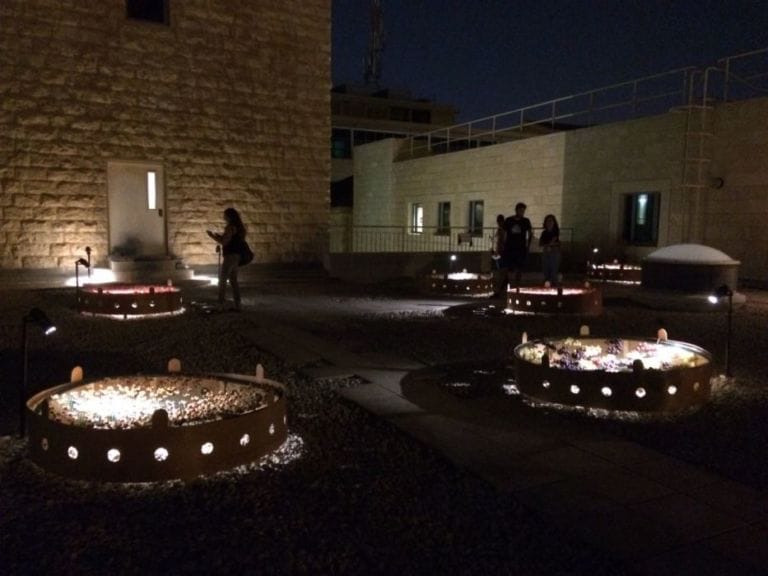 Yes, “processed” food – that dirty word of our time. But the problem with processed food isn't that it's processed, it's that it isn't processed by us. Processing is an essential ingredient for complexity, progress, memory and meaning. In framing the work around a conversation with the artist, “Black Couscous” openly demands that visitors participate in the work.  But the real “work” comes later, only for those willing and able to put in the effort. In this manner, “Black Couscous” mirrors our brave new digital world: open and accessible, but only to a point – to advance, you need the right set of keys. And isn’t this one of the great power differentials of our time? It costs more money, more time, more energy to do the processing yourself – to hunt down raw ingredients, to cut your own salad, to read, to form your own opinions, in lieu of buying fast food, consuming fake news and swiping endlessly.

In the space forged by the days since my visit and the distance between Tel Aviv and Jerusalem, the story that filters through the grounds of my memory is the story of this divided land, in which harmony may only be possible in a supermarket or a cutting board or our bellies – territories in which products from both sides of the green line can be tossed together and occupy the same spaces even if people still can't. I could smell and taste the olive oil that filled a sleek minimal carafe on Rafram’s cutting board. I could consume it, I could carry it with me, but I can't meet the people who make it because my government prohibits me from traveling to Nablus, and I can't stop the uprooting of thousands and thousands of Palestinian olive trees by settlers and the government. 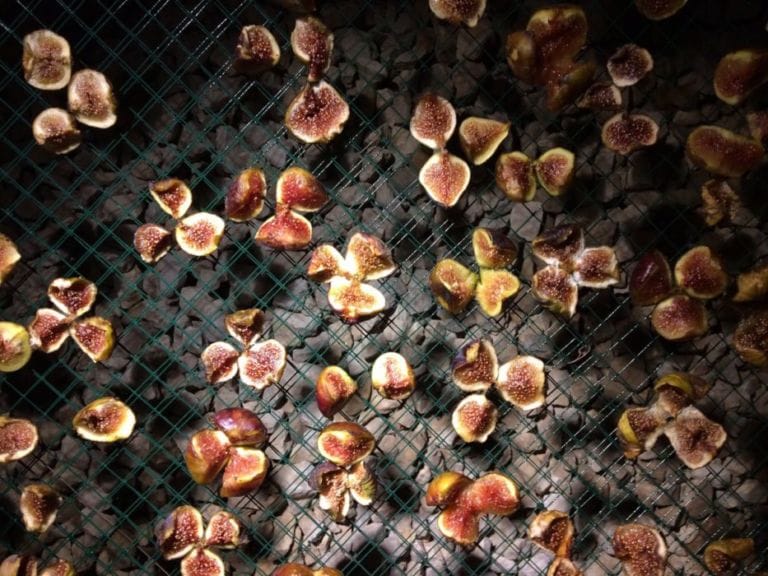 Rafram speaks about black/white food, but “Black Couscous” does not shy away from the dark shadows and local conflict in favor of lighter fare transnational food politics. It is not by accident that the drying figs, a Biblical fruit and a national treasure, are segmented in the shape of the Bünting clover leaf map of Jerusalem, a mosaic model of which hangs from a fence in the square below. That map, which dates back to 1581, positions Jerusalem at the center of the three continents of Asia, Europe and Africa, surrounding them with an ocean filled with sea creatures, monsters and a ship, and far off in the distance, America, Die Neue Welt, the New World.

The whole time we sat there, Rafram didn't say a word about the conflict, but then again, he didn't have to. "Black Couscous" sits above one of the city’s main arteries, an artery that begins in the land of the Jews, cutting East through that tense modge podge of an Old City into East Jerusalem and beyond, the land of the Palestinians. We sit above all of this, above the plaques commemorating the stabbings, the black hats, the Soldiers, the hijabs, and the vendors in the market selling T-shirts that read “Free Palestine” and “Coca-Cola” (but in Hebrew), but we can’t escape the conflict, which permeates and encompasses everything and hovers above us no matter how high the roof, no matter how otherworldly the setting. However luxuriously dressed and cradled in innocuous greens, the couscous is black because it lies in the dark shadows the conflict casts over the roof and all of us. 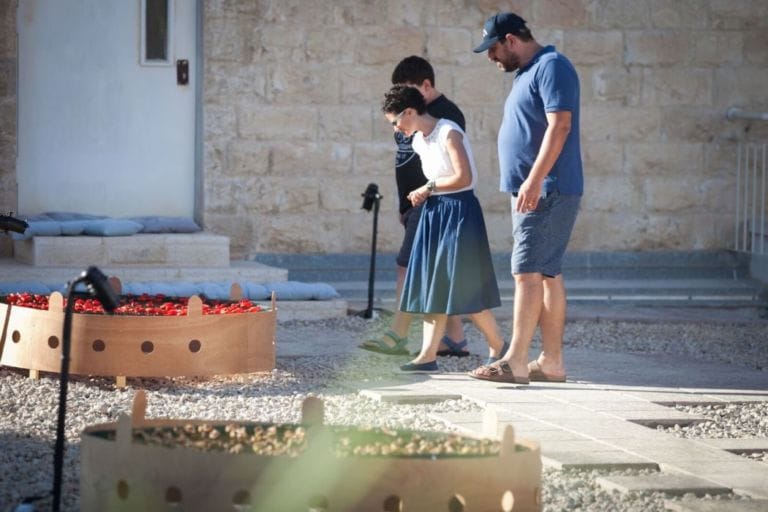 Places with mixed peoples rely on political myths, and those myths often make overtures to food. In the U.S., it is the melting pot, in Brazil, it is feijoada, the national dish of white rice and black beans. And so too here – Israel, the land of milk and honey, of innocence and sweetness. A place where Arabs and Israelis can sit side by side, wiping plates of hummus. We are different but the same because our fridges and pantries are filled with garlic, tomatoes and olive oil, zaatar, labane and cucumbers. But that proximity and duplication rings false – however many bodies near bodies, tomatoes here, tomatoes there, the Arabic we speak is either comical or threatening, and the lack of trust is as real as the conflict, which is already halfway through its 70th year.

Food resonates, but it also resides. For decades, Israel has been rife with overtly political art. But in today’s increasingly right-wing political climate that has slashed art budgets, demands censorship, and even the closure of certain art institutions, does Israeli political art need new clothes? When Israeli society is more fractured than ever and left and right seem unable to agree on anything, except food (and even then, barely), how can Israeli left-wing political art pierce its own bubble and engage and converse with both sides of the spectrum, especially in Jerusalem? They say you catch more flies with honey than you do with vinegar – so too with “Black Couscous”.