"Israel's greatest virtue is its cosmopolitanism; to lose it in exchange for ostracism will not bring any positive outcomes. Of course, I see a great need to put pressure on Israel's militaristic policies, and that is a good reason to expose my work in Tel Aviv" – Keren Goldberg in an email interview with Santiago Sierra

Keren Goldberg – I wish to start by the most obvious question, relating to the recent controversy surrounding the opening of 1:1 Center for Arts and Politics, where you exhibit the show “Crimes”. In the space’s inauguration show, “Stolen Arab Art”, artistic director Omer Krieger exhibited video works by Arab artists without their knowledge, permission or credit. Most of the reactions were furious, denouncing the act while focusing on its ethical aspect, while few others saw these judgments as overly simplistic. Eventually, the show missed its potential to arouse an interesting debate about the problematic way in which some artists today are using their artworks as political and capital currencies, that can only be “profited” from in certain situations and by certain people. Maybe this is due to the way the exhibition was presented and mediated as a straight forward curatorial act rather than an artwork in its own right, which makes use of subversive strategies. As an artist who makes complex use of subversive strategies in his works, how do you see Krieger’s act? What is the place of an ethical debate in art? And, what do you think of cultural and artistic boycott as a political measure?

Santiago Sierra – If we consider art as a testimony of our time and context, Krieger's exhibition is strongly descriptive and deserves our attention. It does not solve any problem. It simply puts the problem on the table, with all its visible knots and interconnections. It was quite a cultural event, or so it seemed to me from here. Naturally, this type of strategy makes many people nervous, but that is the price if we want to escape from the more official approaches. Our ethics should coincide with our aesthetics. Our external stimuli are more or less the same, but it is in our ethical perception of reality that we formulate art. Personally, I will not support any boycott because the weakest always end up paying for it. Isolating Israel can only bring good news for the right. Israel's greatest virtue is its cosmopolitanism; to lose it in exchange for ostracism will not bring any positive outcomes. Of course, I see a great need to put pressure on Israel's militaristic policies, and that is a good reason to expose my work in Tel Aviv.

K.G – As I am sure you are aware, the artistic field in Israel is facing not only the cultural boycott from the outside, but also increasing state and grassroots censorship from within. Recently, your work “Political Prisoners in Contemporary Spain” which includes obscured portraits of Catalan separatists who are under arrest or face charges was censored at Arco Madrid. How do you think art practitioners today should face such challenges?

S.S – The work of which you speak of not only exposed cases of Catalan independentistas, but also of Basque and Galician pro-independence, anarchist militants, antifascists, Andalusian day laborers, artists and so on. What happens is that Catalan is what sounds most outside and inside Spain. Repression is becoming very popular. I'm not going to tell anyone what to do but if you talk about your environment you should consider all its sides. Our political ecosystems are highly toxic.

K.G – The show includes a new performance, in which a Arabic speakers read the names of all the victims killed in the conflict in Gaza since Operation Protective Edge through the beginning of the performance. It is a direct continuation of the other work on view, the video “2.205 State Crimes” in which Arabic speakers read the names of those killed during Operation Protective Edge, between July 8 and August 26, 2014. Both works follow a chronological order, thus drawing a narrative of continuous killing. What is the source of the names? How long did the performance last? And was it uploaded live online?

S.S – The list includes all the dead regardless of ethnicity. The source is Israel Palestinian Time Line, a very up to date website with a lot of information on each case. It belongs to an organization called If Americans Knew. It took about an hour to read the deaths update from the 2014 victims' reading. And the reading was indeed streamed live online, on our Facebook profile and on YouTube.

K.G – The act of continuous name reading was also used in “The Names of those Killed in the Syrian Conflict, between 15th of march 2011 and 31st of December 2016” (2017), which started at the CCA Tel Aviv, and in “120 hours of continuous reading of a telephone book” (2004). On one hand, these works use an opposite tactic than many of your famous works from the early 2000s, which employed hired laborers from low socio-economic groups to perform various tasks, such as hiding in boxes, dyeing their hair blonde, standing facing the wall or tattooing a line across their backs. As opposed to these works, which used nameless and many times faceless or un-visible people, the “reading works” name names, thus giving each person its identity. On the other hand, the repetitive reading of imageless names also bares a dehumanizing effect and is reminiscent of reciting an inventory list. Would you agree with this duality? Do you see these works as different from your other works? If so, how?

S.S – I created many other lists, of state crimes in Mexico, the 300 richest people in the world, and so on. I have also photographed a lot of backs. In reality the phonetic proximity of one or the other name on the list dissolves their identities as a pixel. It appears on the list in representation of a specific human group. This reality evaporates its own identity as a complex individual and includes it in a mass of individuals. There is a work by Christian Boltanski that has always fascinated me. It is a book with the list of all the participants of the Venice Biennale since its foundation. These names were of illustrious artists in their time, yet almost none of them ring a bell today. It's a list just like the phone books of the 20th century. That gives us a sense of opacity towards the people behind the name.

K.G – Following on this theme of seriality, I am interested in the way your very carnal and bodily performative works bare traces of minimalism and conceptualism, seen more firmly in your early works which dealt with construction, obstruction, architecture and sculpture in public space. Even your works’ descriptive and instructive titles echo minimalism and conceptualism traditions. In an interview in BOMB from 2004 you mentioned as part of the advantages of minimalist aesthetic the fact that it helps to avoid distraction and is also easier and cheaper to transport (the shape of a cube). What is the importance of 1960-70s minimalism and conceptualism characteristics to your current reading works? And how do you think they are relevant to art today in general?

S.S – A list is a modular composition; it is very minimalist. Each name works in a way similar to a module. On Kawara, who passed away in 2014, organized readings of millions of years on several records – another very inspiring work. I take the linguistic contributions of conceptualism and minimalism as my own but I often talk about very different things. The contribution of this and other works is similar to “booing” in a theatre.

K.G – You are probably aware of the Israeli holocaust remembrance paradigm “Unto Every Person There is A Name”, which encourages to remember each victim by his/her name. Yad Vashem holds “The Central Database of Shoah Victims’ Names”, and initiates the reading of victims’ names on Holocaust Remembrance Days ceremonies. I believe that for most Israeli and Jewish people, the association to this will be unavoidable when visiting “Crimes”. Do you see these works as having a commemorating function, or rather a one-off act? What is the importance of their durational factor, and how does it relate to the issues of memory and trauma?

S.S – Death knows no nationalities. I intend to generate empathy. The death generated by the crimes of the State and Capital can reach us all. Today it's someone else's turn, but tomorrow it could be you. This historical randomness is part of the geopolitical whims of criminals. I personally do not believe in nationalities. Civilization presupposes solidarity and mutual help; barbarism sets walls and weapons.

K.G – And indeed, “120 hours of continuous reading of a telephone book”, as well as your famous work for the Spanish Pavilion in the 2003 Venice Biennale, “Wall Enclosing a Space”, emphasis the segregation produced by arbitrary national identities. But the works in the current show include the names of Palestinian as well as Israeli victims. Would you say that these works take a more humanist approach, rather than holding a sharp mirror to society?

S.S – The humanist thing has always seemed strange to me, as something opposed to dogism or alienism. No, it's not humanism, it's internationalism. 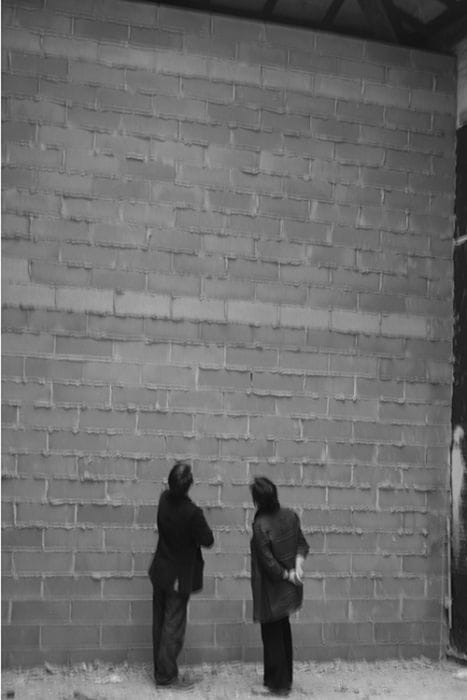 Santiago Sierra, from the Venice biannle, 2003

K.G – Lastly, I want to ask you about your rejection of the Spanish National Art Prize in 2010. You mentioned that you couldn’t accept an affirmative declaration from a government you don’t agree with. However, you also mentioned before that we should treat the art and cultural worlds as “our worst enemies”, as they are part of the capitalist mechanism. You employ your transgressive practice from within, display at state-funded museums around the world and sell your works to collectors. What is the difference between this and taking the prize money in order to produce new critical work? There is no “clean money” today anyhow.

S.S – Let me explain. The national prize is received from the hands of the King of Spain and not even for all the gold in the world will you see me on television shaking his hand.

1:1 Center for Arts and Politics