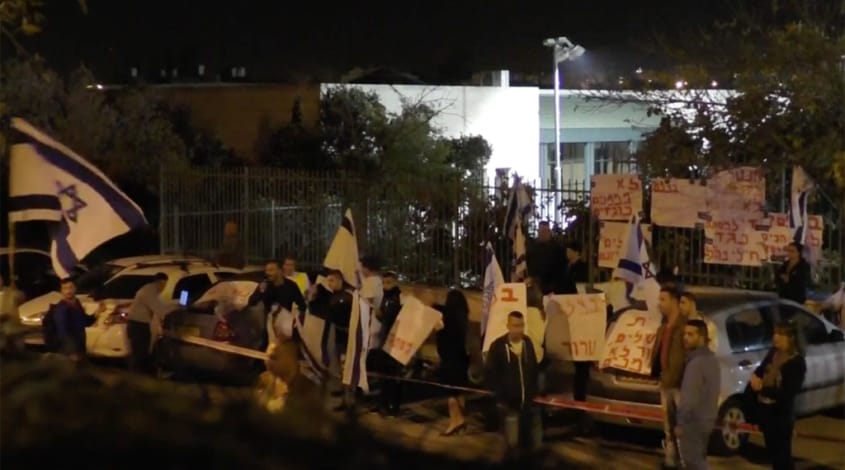 Right-wing protesters outside Erev Rav’s November 10 event in Jerusalem. (screenshot by the author from YouTube)

In retrospect, we were complacent. We thought that the opposition would fade away by the time of the event, or at most, the action would amount to a polite protest vigil. Even after seeing the distorted stories claiming that our event supported terrorism and called for the destruction of Israel we were relatively calm. We are accustomed to this language — the lies and distortions of the nationalist right in Israel.

But when invitations for a demonstration against our event started appearing on the Facebook pages of extremist organizations the management of the Hansen House hired six security guards and notified the police. The night of the event, Monday, November 10, there were roughly 50 people inside to attend our event, while others were left outside after the guards locked the gates as a safety precaution. When police arrived, they recognized some of the protesters — and they suspected things may turn violent — so the police officers stayed at the scene and called for backup.

Erev Rav is an independent journal of arts, culture, and society, edited by us. Established in early 2010 to advance the discourse on art, and to support a multicultural, democratic, and pluralistic discussion on culture. Working out of Hansen House, an art centre located in a former leper colony, we also organize numerous events, including video screenings, performances, and artist talks. “The Pain of the Archive” was an event we organized for both the launch of the book by Dr. Ruthie Ginsburg, And You Will Serve as Eyes for Us − Israeli Human Rights Organizations as Seen Through the Camera’s Eye, and the screening of excerpts of works by choreographer Arkadi Zaides: “Archive” and “Capture Practice.”

An hour before the event starts, protesters start gathering in front of the gates. Arkadi Zaides and Ruthie Ginsburg entered through a side door. A small group of people standing in the doorway of the hall demanded to enter. They are very aggressive, and the security guards recognize them as members of La Familia — a notoriously violent and racist football hooligan group. They told the guards that they came only to hear another opinion. One of them has a small megaphone. When the security decided against letting them in, they began to shout, curse the guests, and take pictures of those in attendance.

Meanwhile, outside protesters (which included members of other extreme right groups), guests, and police started to grow in numbers. There appeared to be some chaos at the gates of the compound, but we were locked in the hall and could not see what was happening outside. The security decided to secure the main gate, which left many of our guests stuck among the protesters.

We began the evening citing the title of Ariella Azoulay’s writing on Aïm Deüelle Lüski‘s work, ”A Brief History of Photography in Dark Days,” which raises the question of photography in these times and the need to challenge the mechanisms of visual clichés, while trying to generate other gazes and devices.

Ginsburg presented her research on the use of photographs by human rights organizations in the Palestinian Occupied Territories. Five minutes later, the power failed — later we discover it wasn’t an accident. We improvised in the darkness, and found a way to connect the computer and projector to power, but not the lights. The rest of the evening was held largely in darkness, with the only light being the projected images on the screen, while we continued to hear the cursing and shouting from outside.

Ginsburg talked about how to use photographic images in the Occupied Territories. What we appear to see in them and what is hidden, and therefore less discussed. She mentioned the multitude of cameras in conflict areas, which on the one hand helps expose the truth, but also makes any incident that was not documented not worthy of investigation.

Zaides presented excerpts of his works that are based on documentary material filmed by Palestinian volunteers of the B’Tselem Camera Project. Zaides is a veteran at dealing with protesters. Recently, the Israeli Petach Tikva Museum was asked to remove one of his works from an exhibition.

In his work, Zaides traces the body language and movement of soldiers and settlers who are filmed by Palestinians. The connection between the adoption of the Palestinian perspective and the movements of the Israeli solders or settlers allow him to emphasize the physical reactions to which they resort to in various confrontational situations. Zaides wished to examine the somatic influence of the Israeli Occupation on the bodies of those administering it, while raising questions about his own involvement in the act.

With the exception of the electrical sabotage and shouts coming from outside, the talks proceeded with little interference for those of us in the hall. Suddenly we see people throwing stones at the windows. The police rushed to the location of disturbance, and discovered that the protesters appeared to have broken the security camera at the entrance.

The evening ended with questions from the audience, but the tension made it difficult to concentrate. Before leaving the room, a security officer instructed the audience to avoid conflicts and not to take any pictures. As they left our guests were cursed and taunted in a shocking way. Arkady and Ruthie stayed inside for an additional 20 minutes, and left only with a police escort that accompanied them to their car. Through the windows we saw protesters running down the street in all directions, we decided to leave later — and only after police reported that the protesters had dispersed. The right-wing Israelis yelled at the Jewish Israeli attendees all types of obscenities, including “You Nazis, we’ll make soaps out of you,” “You fucker, you leftists,” and “You need to go to Gaza.”

Later on we heard reports from friends and guests about harsh verbal and physical violence. A friend, who was stuck outside with the protesters, was punched in the stomach, and a woman was beaten with a flag pool on her head, but all are ok now. All the people I spoke to were very shaken by what happened.

Here in West Jerusalem the police protected us. A few protesters were arrested and released the following day, however we don’t believe the police filed a report. During the same period, in East Jerusalem, protests and riots by Palestinian youth continued, and the police continued to shoot tear gas and stink bombs at the protesters, while beatings and arrests were frequent. In Gush Etzion, a young woman was murdered by a Palestinian, and a security guard was stabbed on the light rail. The next morning the walls of the bilingual school, the only place in Jerusalem were Arab and Jewish children learn together (and some of our children and the children of our friends go there), were graffitied with “Death to the Arabs” slogans. Just another November day in Jerusalem.

This site uses Akismet to reduce spam. Learn how your comment data is processed.