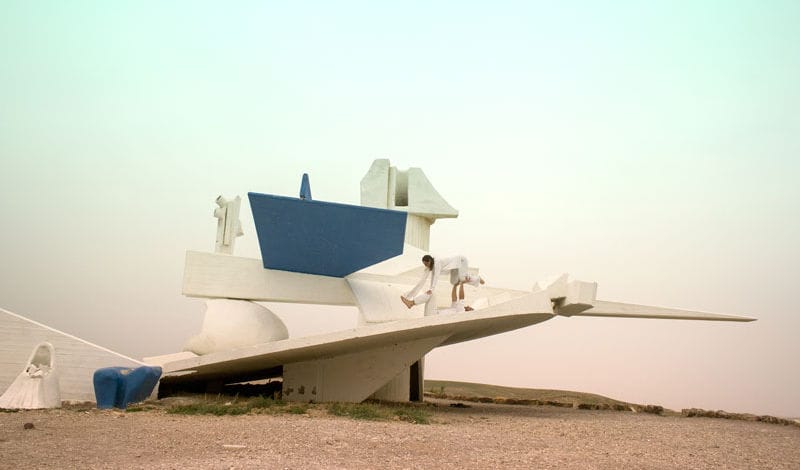 When Miri Regev, Israel's Minister for Culture and Sport, spoke about bringing art to the country's periphery, the city of Arad might be a good example of the sort of place she had in mind.

Regev has called for some of the country's theater and dance ensembles to perform in the West Bank, regardless of their political opinions, and looked to promote art in otherwise neglected parts of Israel.

What Regev might not have anticipated happening in smaller cities is the recent hostility witnessed by curator and artist Hadas Kedar at an event organized by Omer Krieger and Roman Hillel named, "The Voice of the Next State". The event, themed around an imagining of the state of Israel after the occupation, was staged in Arad's town square and held in conjunction with the opening of a new exhibition.

"Krieger and Hillel arranged for a few people to speak on a variety of subjects connected to Arad," said Kedar.

A Bedouin lawyer, a religious woman from Machsom Watch (an organization of women who observe the behavior of Israeli soldiers at checkpoints) and my father, agreed to take part. The mayor also attended.

Each spoke about issues connected to their respective communities, but when Leah Shakdiel, the woman from Machsom Watch, spoke about the idea of ​​co-existence and the occupation some of the crowd got angry and shouted at her.

A few people approached the mayor and asked him why leftists were talking at the event. A soldier threatened to physically harm Shakdiel when she left the stage. We had security, but it was still dangerous. The following day there were some horrible things written on the municipality's Facebook page. "

Kedar is one of the few surviving relatives of Theodor Herzl, the Hungarian-born Jewish writer credited with being one of the founders of Zionism, and is part of the Israeli cultural left. She spent her teenage years in Arad where she still owns an apartment.

In 2014 she received an award to be "Artist of the City" from the Culture Ministry, a role which, due to her longtime association with Arad and strong ties to the country's artistic community, she would be well suited to fulfill. As well as being an artist, curator and teacher for some fifteen years Kedar has an active interest in socially-engaged art and hoped to use her knowledge in dealing with some of Arad's ethnically diverse communities.

Considered the first planned city in Israel – bordered by the Negev and Judean Deserts – Arad is home to Bedouin, Ethiopian Jews, Black Hebrew Israelites, refugees and religious and secular Israelis, approximately a third of which are immigrants from the former Soviet Union.

With the help of the municipality and funding from the Ministry for the Development of the Negev and Galilee Kedar set up an artist residency program that involves inviting international and Israeli artists to spend time in the city for periods varying between a week and a month. A house was provided for the artists for the duration of their stay. She also set up a Facebook page titled "Arad Art and Architecture", to attract interest in exhibitions and the city's architectural heritage.

Arad was designed as a modernist city, essentially to forward the Zionist vision in the Negev. Its streets are dotted with Bauhaus-influenced buildings and ten unusually shaped concrete gardens, inspired by Brutalism, serve as would-be communal stop-overs in several neighborhoods. 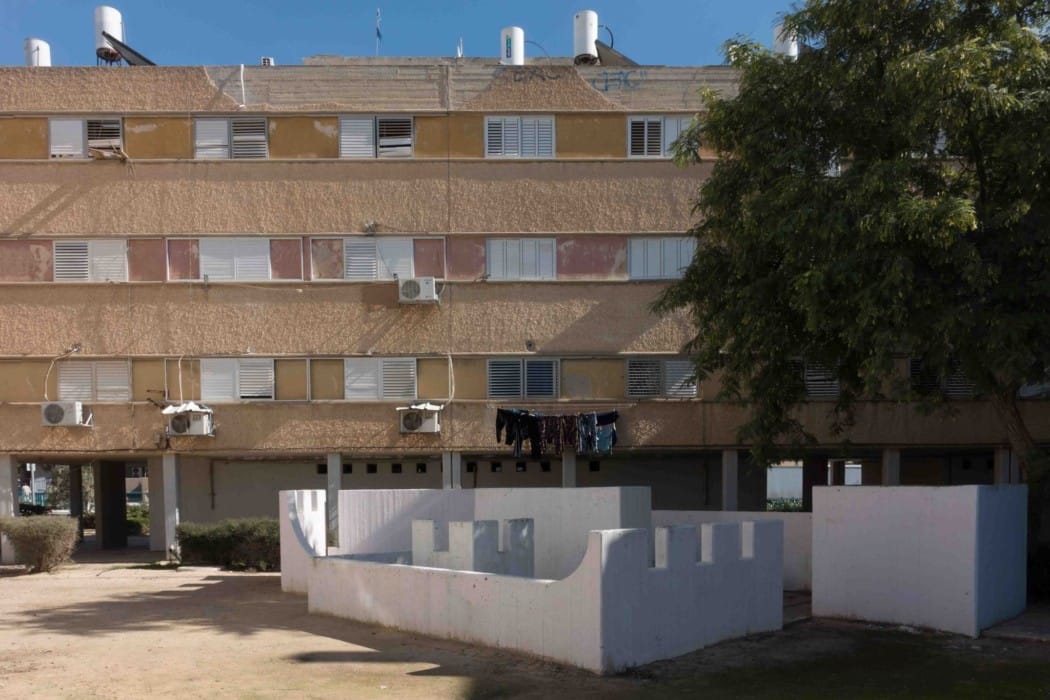 "The artist residency project has been going on for about two and a half years and serves as a kind of incubator to bring art into the public sphere. I invite artists to create their own work while here, but also ask them to initiate something art-related within the community. The main criteria for the artists is that their project touch on a theme connected to the city and its residents, "said Kedar.

"A Norwegian couple and a Swiss artist created art and worked with residents who are concerned with the environment. There are ongoing tensions with a local company who mine phosphate in the area, causing fears of air pollution.

Creating community-based art brings its own set of challenges. The social aspect involves collaborating with people who are not trained artists, yet at the same time we are trying to create something good enough to be exhibited. "

Kedar's role as city artist has recently evolved with the re-opening of an exhibition space, the Arad Contemporary Art Center (ACAC), of which she is head curator. The dual function Kedar performs means she puts in hard time alternating between Arad and Tel Aviv, but it also allows her the freedom to explore her curatorial practice; a practice informed by an abstract notion of Arad as "place", a site where art, architecture, history, landscape and politics converge.

Dancers and performance artists have been invited to stage and create works, some of which involved the use of Igael Tumarkin's publicly-funded monument at Mitzpe Moav. Israeli artist Alona Weiss filmed an Acro-Yoga duo performing a set of exercises on Tumarkin's large-scale, concrete and steel assemblage, the rhythm and tempo of their body movements playing off the stark angles and shapes of Tumarkin's sculpture, set against the desert landscape.

"There is a lot of art now being made in Arad by local artists and people want to see what is being done," said Kedar. During my time in the city I've built up a relationship with the artists who live there. They sent me their portfolios in response to a call I published, which gave me a chance to see their work. They also conveyed their feelings about not being included in the residency program or exhibitions in the gallery, despite living in the city.

I decided that, out of four planned exhibitions a year, one would be given over to showing the work of local artists and to those who had grown up in the city, but have since left. "

The latest exhibition at the center is titled "Arad: From Vision to Delusion – Chapter 1" and presents local artists, most of which are Israeli, but also includes the work of two Bedouin photographers.

Kedar has put together an interesting and diverse exhibit, a kind of mish-mash of contemporary artworks that are presented in a space that is the very antithesis of the four-walled "white cube" gallery that is the norm in Tel Aviv.

Residents are introduced to Ruth Dorrit Yacoby, one of the city's best known artists, in the form of two mixed-media paintings and a short video that takes the viewer inside Yacoby's studio-warehouse, home to hundreds of works by the recently deceased artist. Kedar has hopes that Yacoby's work and studio will be conserved, a place bearing witness to an artist who lived and worked for the majority of her life in Arad, away from the spotlight of the Israeli art world, mapping out her artistic vision in an ongoing series of paintings and installations.

Probably the strongest work in the exhibition is a video installation by Lihi Yalin and Raz Rozkin titled "The Factory". Projected onto a transparent curtain are a vast amount of black and white, archival photographs of industrial buildings and neighborhoods located in Arad. Interspersed are aerial views and stills of residents and notable points in Arad public life, such as the visit of state figures on the occasion of the city's founding in 1962.

Taken as a whole the film, together with its first-person Hebrew narration, appears to chart a kind of documentary history of Arad, creating a bleak, but striking portrait of a city, weathered by the desert elements and the factory and building construction which have formed the backbone of its growth.

In what is the second exhibition at the art center Kedar has received positive feedback and gives the occasional tour to residents and visitors from Tel Aviv and Jerusalem.

Despite the disturbing scenes Kedar witnessed at the recent event she said, "It will not change my agenda. I think people like what I'm doing and there is a feeling of something happening here."

Arad might attract the attention of Regev, as a city on the periphery deserving of funding from the Ministry of Culture. Such funding is conditional on the center maintaining itself independently for a period of two years. For now, Kedar has gone some way to putting Arad on the map as an Israeli cultural city of note. 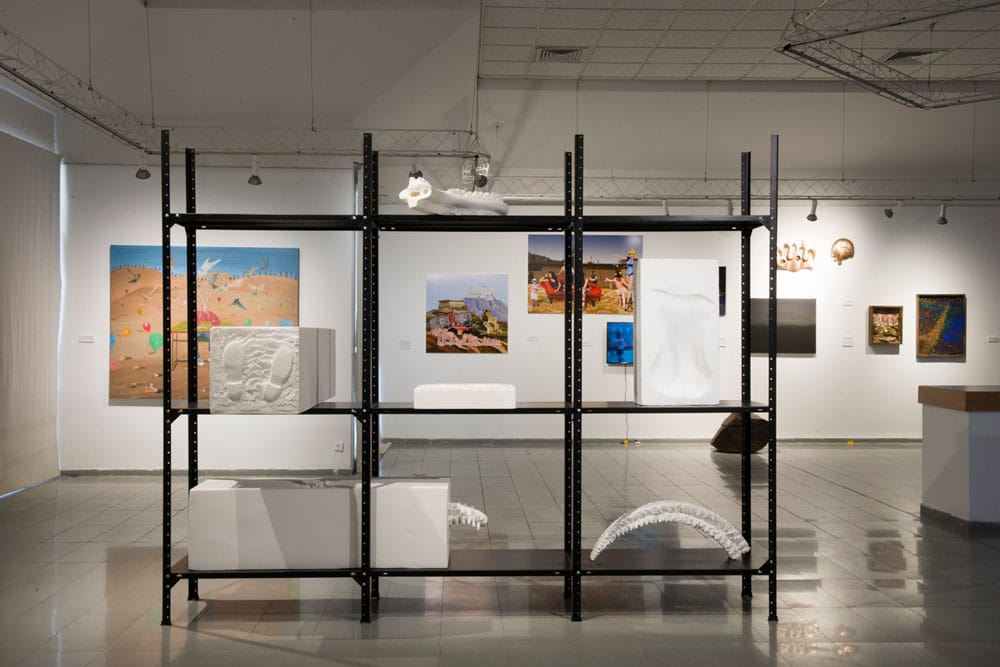